Do you like 2/2s for 2? Do you love Mandrakes? Do you wish your Treasure Troves gave you a little bit more value. If you said yes to these things, then I have just the card for you. Eternal Card Game, meet Matriarch Zende. 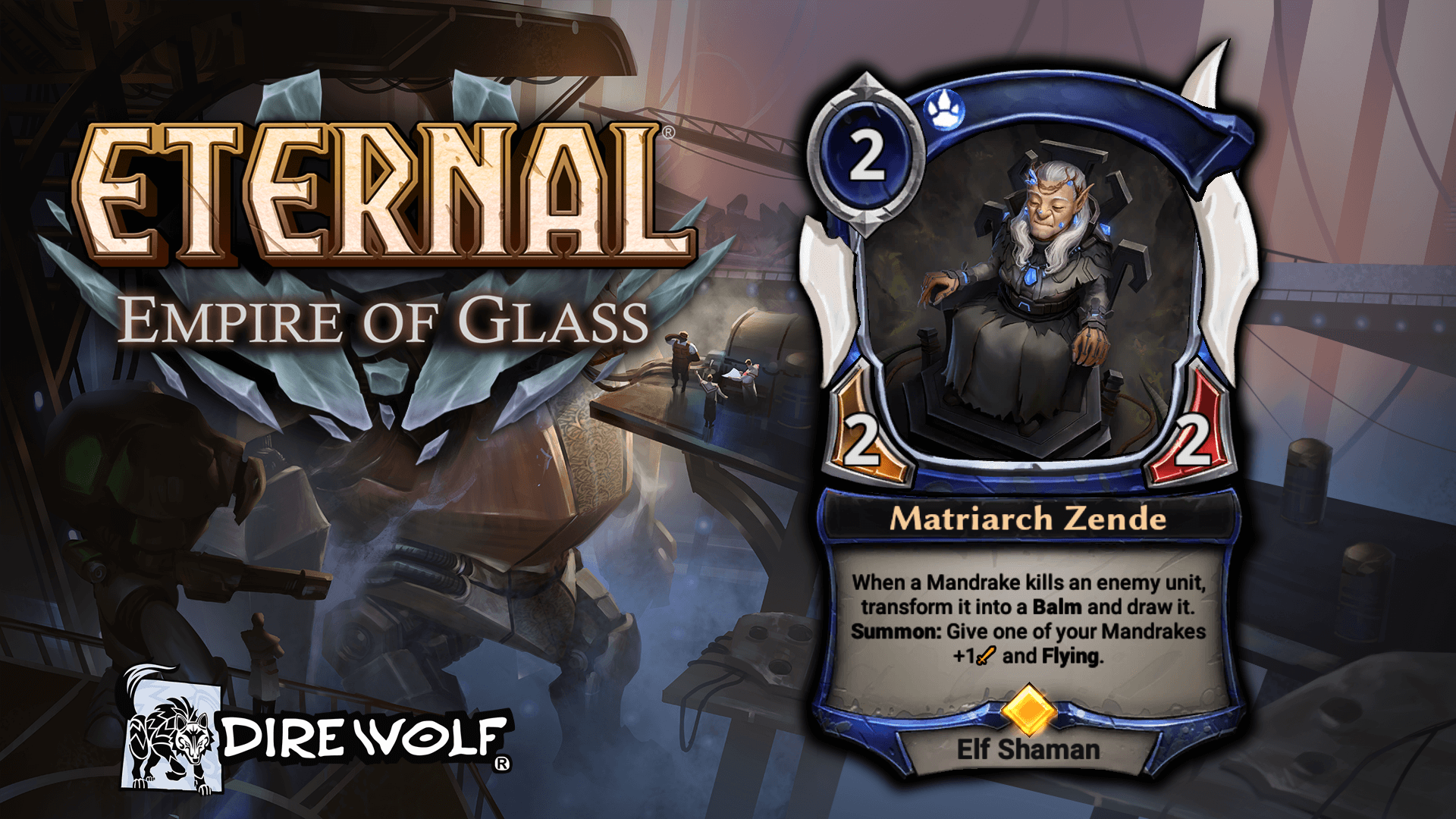 Bask in her majesty. Enjoy the fruit of her plants. For you, they will be sweet nectar, for your opponents, they will be bitter and poisonous. Now obviously this card has a major caveat, you need mandrakes to make it useful. Not only does its summon only work on Mandrakes its passive ability requires them as well. A quick check of the existing mandrakes in Eternal (including those already spoiled as of Thursday) shows 22 Mandrakes in TPS. There are also 3 cards that create Mandrakes, 2 of which create little seeds and the other one puts titans in your deck at random. Time has the most Mandrakes at 9, Primal has 7, Shadow has 4, and 2 are multifaction. The other notable thing about most of the Mandrakes is the size, they are chonky bois, but this means that they tend to be expensive or significant drawbacks on a summon ability (like Snapping Hydrangea or Guardian of Spring). This means that we aren't often going to have a Mandrake early to take advantage of the summon ability of Zende. I think we will need to see the rest of the new set before we find out if Zende is a legit card of just a jank meme.

As of right now the best card to combine with Zende will be Invasive Species. Our recursive boi is the only 1 drop Mandrake and giving it flying reduces some of the reckless drawback. Also since the buff is permanent, the market copy made by the entomb will also have +1 attack and flying. The second best card will be Snapping Hydrangea, flying gets you over the cultist that it creates and the cultists will become fuel for Zende's passive ability.

Yes, that interesting line of text, when a mandrake kills an enemy unit transform it into a balm and draw it. So what is Balm? Well, if you remember the third question I asked back at the top of the article I made a passing mention to Treasure Trove. We all know treasure trove is 2 power to draw a card, so clearly balm must do at least that. It also gives a unit +1 attack (sweet) and Reckless (uh oh). Enough stalling, here is the card. 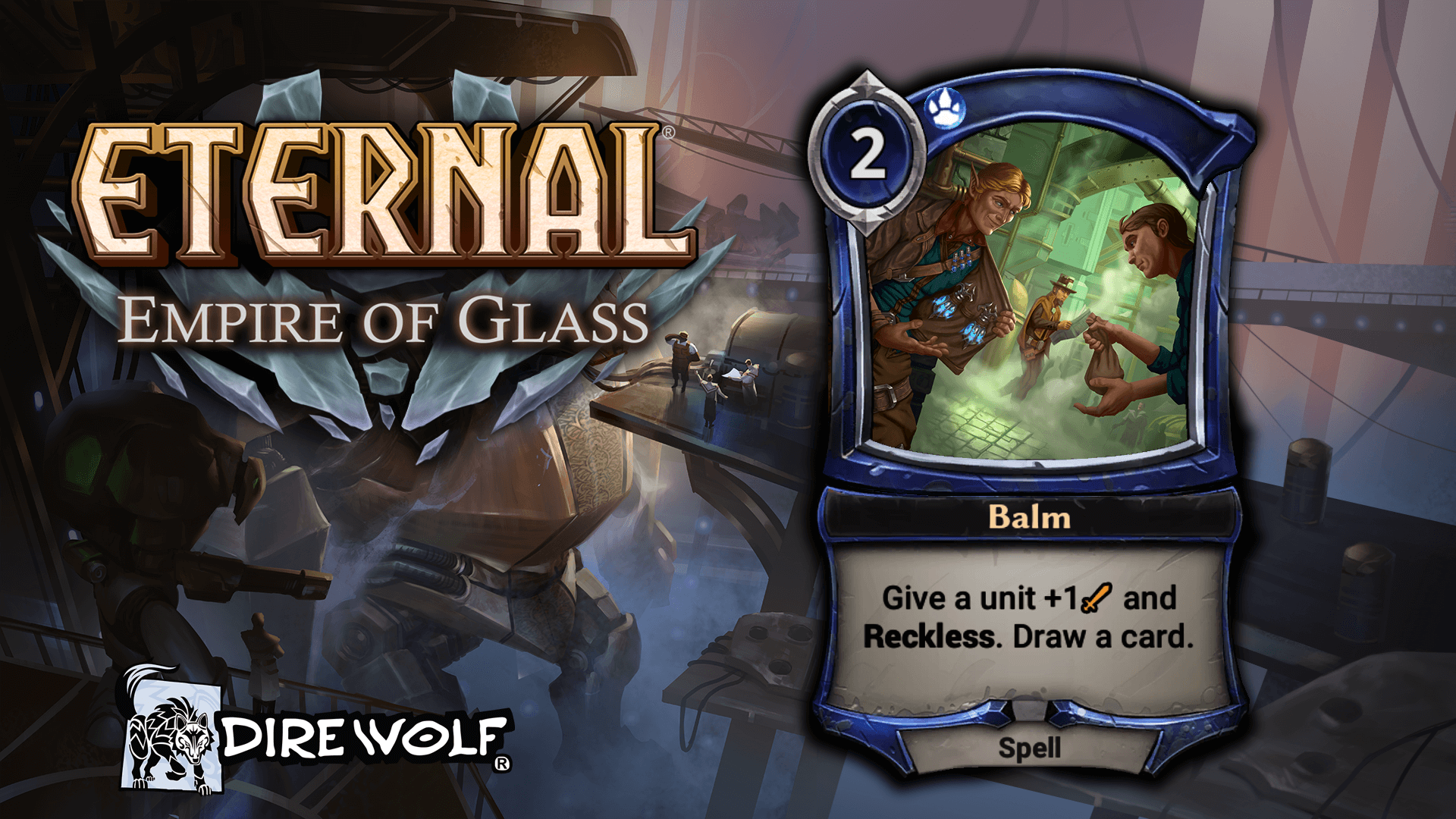 As you can see, Balm is a spell not an attachment, so the effect it has on a unit is permanent. For example, if you happen to be recurring Feral Mandrake, it keeps both the buffs and the reckless each time it comes back. If everything is going to plan, then it will do a lot of returning, since each time it trades with an opposing unit it returns exhausted so long as you have quad primal influence. Find a way to give it overwhelm plus killer and you have the second coming of Dawnwalker. Back to Snapping Hydrangea, your opponent isn't going to want to chump block with them as you get free cards, and if you get a balm, you get to start sending those foolish cultists on unauthorized suicide missions. When you play balm on an opposing unit the +1 attack is mostly a drawback, but it can be turned to a benefit when played on a 0 attack utility unit that would otherwise be safe from creature combat and unaffected by the reckless clause such as Lethrai Courtier or Auralian Merchant. Even if your opponent finds a way to recur the utility unit, they only get to keep it around a short while before it suicides back into the red zone again.

Now if you're like me and happen to be a rules buff, you might be wondering how this card interacts with other void centric mechanics. Not to worry, I already confirmed several interactions with DWD. Firstly this is not the 2nd coming of Statuary Maiden, but our dear Matriarch gets halfway there. Zende does not turn off entomb abilities, but revenge units get hosed, they transform and are drawn into your hand instead of going back into your opponent's deck. If a card has voidbound and is transformed the newly transformed balm will no longer have voidbound and will be drawn like normal, if however the whole void is locked down, say by a Adjudicator's Gavel or an Embargo Officer, then they transform but stay right where they are in the void.

Anyway, I will be really interested to see if this card will be worth the shiftstone used to craft it and I hope it is. I wish I had more to say and a decklist to give you in parting, but I think we need to see a few more Mandrakes as well as know what expedition looks like post rotation, since I believe that is where this card had the best chance for success.  Thanks go out to DWD for not only giving schmucks like me the chance to reveal cards to the public, but also for some inexplicable reason blessing me with great spoiler luck in always getting to spoil a rare or (more often) legendary card. Thanks to Kasendrith for sharing my other spoiler this season on stream, spell damage's worst enemy, Onoris Roa. Lastly, the biggest thanks to the guys over at Eternal Warcry (specifically Stever) for hosting this article and for managing the best decklist resource this game has. As always, you can find me in game at GhettoBiolan+6390 and on discord of the same name.

Catch you in the ranked queues.
-T3hMatt