Omens of the Past Spoiler: Champion of Impulse

Hello everyone, I am Skiyt. You may have run into me on the ladder on my way to master. As for my experience with card games, I have been playing Magic: The Gathering since Ice Age, and have played Hearthstone, TES: Legends, Gwent, and Eternal since their closed betas. It is my pleasure to bring you the first article for Eternal Warcry, which also happens to be the first spoiler for Eternal Warcry.

Some of the most important cards for defining color pairings in set 1 are the cycle of Champions, cards that get stronger when you meet certain influence thresholds. These units pack a significant amount of power into a comparatively cheap package and almost all of them have seen competitive play in one form or another.


With that in mind, let’s have a look at the Praxis (TF) offering! I present Champion of Impulse: 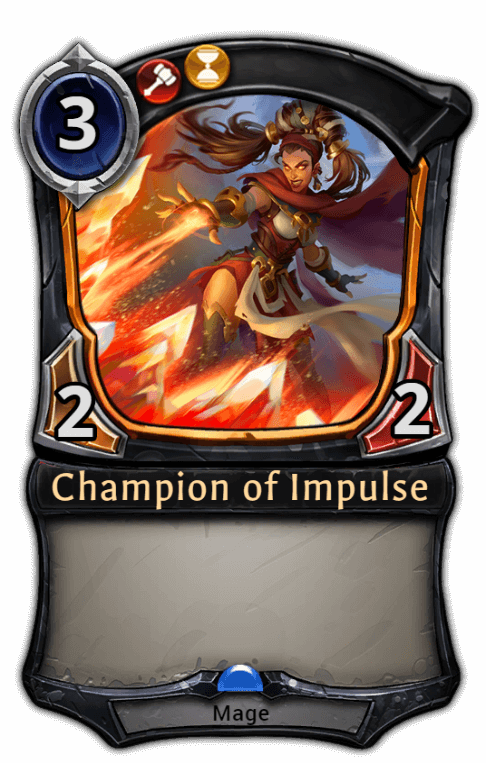 Ok, so it’s not much to look at when you just consider its base stats, especially when you consider most of the Champions from set 1 have base stats equal to their power cost. Let's take a look at the first ability and see what else the Champion has to offer. 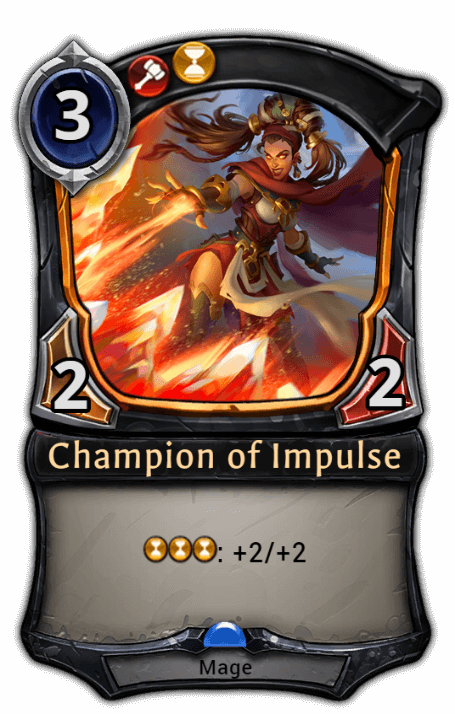 If you are able to activate the time ability on turn three, the card becomes a 4/4 for 3 power, a rate I can totally get on board with. As a 4/4, Champion of Impulse can brawl with everything on curve short of a False Prince and dodges common removal such as Torch, Annihilate, and Sword of Icaria. Now let's check out the fire ability. 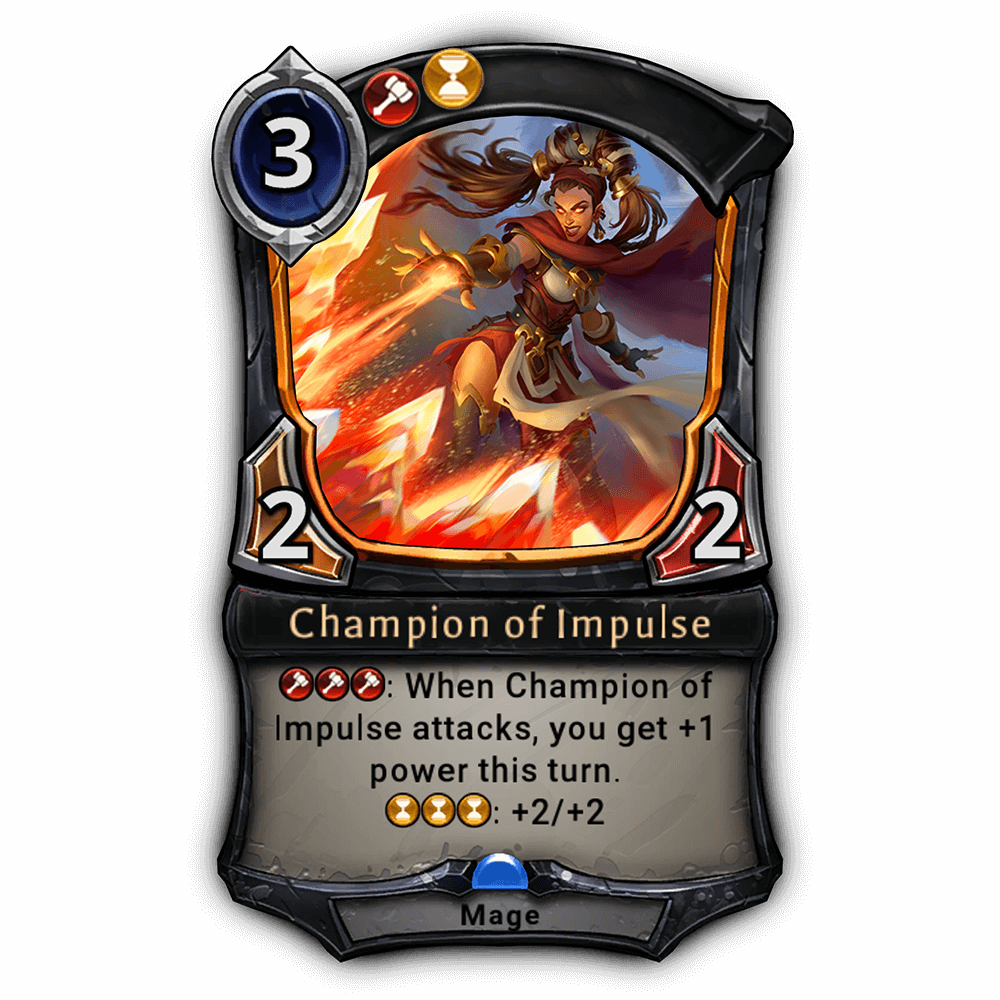 It won’t be common for both abilities to be active turn 4, as a result, you will often find yourself with a 2/2 Champion but wanting the extra power it provides. We are going to need to determine the best way to clear the path if we want to be getting the most out of it, however, there could be situations where it is worth suiciding for a one turn boost. I think the fire ability is the more interesting of the two but it will be more difficult to use to the fullest. It will require more knowledge of set 2 before we can fully appreciate the potential of Champion of Impulse.

Praxis decks have historically come in 2 flavors: the typical tokens variant, and a much less common midrange variant “popularized” by ManuS and VSarius a few weeks back. I have included two deck lists below that could serve as a starting point when looking to include Champion of Impulse in a deck, just pretend that the Champion of Chaos are Champion of Impulse.


The first deck includes Champion of Impulse in a tokens list as an aggressive 3 drop that could ramp into an early, although underpowered, Arcanum Monitor. I don't think this is where the card will have greatest impact, and it conflicts in cost with the go-wide cards.


The second deck list goes in more of a midrange/burn direction. There are three ways this deck takes advantage of Champion of Impulse:

1. Being an aggressive deck, we are definitely in the market for a 3 power 4/4.

2. Fast spells which can be played mid combat such as Torch. If set 2 has a good Rapid Shot level trick in fire or time it would fit nicely here.

3. Ramping out quality 5 drops on turn 4 (or even turn 3 with Initiate of the Sands and perfect power draws) in the form of Obliterate, Soulfire Drake, Bait, and Amber Monument. Alternatively, playing Praxis Displacer on turn 4 allows us to get through with Champion of Impulse and follow up with a 1 drop post-combat.

The top-end ramp options are a little limited for this type of strategy in set 1: Soulfire Drake would not be able to be cast until post-combat, so we are not able to take advantage of its charge ability. Bait is interesting as it provides some sweeper protection, but is not particularly aggressive for a 5 drop. I think this is the sort of deck that would provide a better home for Champion of Impulse and I will be on the lookout in set 2 for fast spells that could be used during combat and strong cards that the Champion of Impulse could be used to ramp into which would leave this deck in a pretty good place.

Let me know your thoughts on Champion of Impulse in the comments below.

Skiyt 2017-06-22 Eternal Version: 1.21
I am not certain of this, but I believe it will increase the numerator of your power and not the denominator, meaning your maximum power remains the same and fails to trigger either amber monument or xenan obelisk
Treelamp 2017-06-22 Eternal Version: 1.21
You talked about combat tricks with Champion turning them on, but how cool does it sound to turn on your Xenan Obelisk early, just in time for combat?

And having said that, I realize that this is going to most likely function like when an Initiate dies, so you'll have an improper fraction of Power, 8/7 isn't going to turn on Obelisk is it? That is actually a shame.

What other X spells are even available? Copper Conduit could certainly make use of extra power, but the Amber Monument provides nearly the same function and doesn't force you to use all power later in the game when a trick would be handy to play as well. Actually, thinking about Amber and Obelisk, the Monument might need to be careful not to trigger it's Transmute before you can sustain it's cost, because it could end up being a dead draw off the top as a 5-cost creature while you're on 4 power (Assuming the Champion dies after pumping you up to 5 once). A slight consideration to be made perhaps.