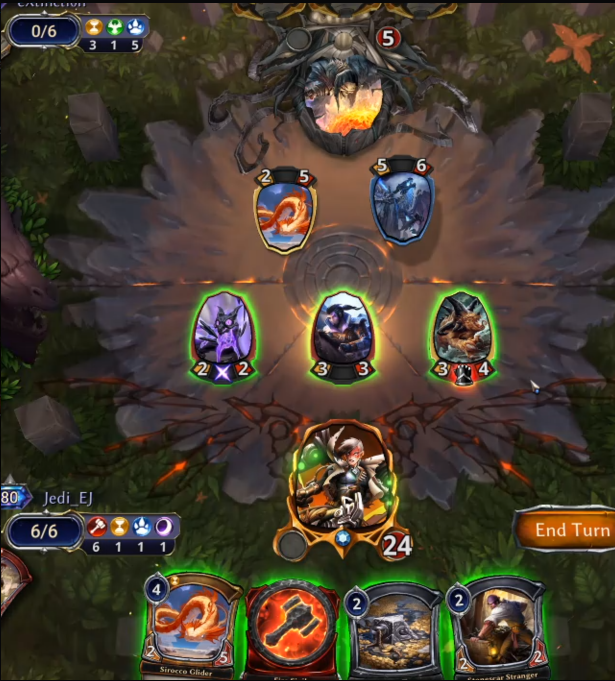 Welcome to another ‘What’s the Play?’. This time we have a board state that’s pretty well developed, an opponent on the ropes, and an important decision on our hands. In addition to the image below, I want to point out that our deck has an above average number of strangers. Assume most decks have 2-4 common strangers while ours is more in the 5-7 range.

Johnholio - Immediately, I don’t think we want to use the treasure trove to draw a card. Yes, we might draw a stranger, which, when given Charge by the Swift Stranger would give us lethal. However, if we don’t draw that stranger we can’t play the Sirocco Glider and the Stonescar Stranger this turn. Also, we already know that they have a Thunderstrike Dragon in hand. We can assume that they don’t have anything better than a Thunderstrike Dragon in hand either, since they probably would’ve played it last turn. If we play the Stonescar Stranger plus the Sirocco Glider, we can swing with everything except the Glider now. This forces our opponent to one life as they block the Thunderstrike Dragon on the Swift Stranger, and their Sirocco Glider on our Horned Vorlunk. Next turn we have lethal even through the second Thunderstrike Dragon, and our opponent likely won’t have multiple units to play in one turn.

Dart_Herman2 - I imagine some newer players might want to roll the dice with the treasure and hope to end the game immediately. That being said, I agree with John here. Looking at the life total, there’s no real risk of dying on the backswing if we send all of our units now. Being at 24 life makes this a much easier decision than if we were on a lower number, and potentially risked dying on our opponent’s next turn. There is a consideration on the number of burn spells or combat tricks we might draw if we use the treasure now. But since we have a clear line to win the game in two turns, I still don’t think the risk is worth using the treasure immediately

Jedi_EJ - You guys have the right of it. The only real question is if we use the treasure to potentially spike a second stranger for lethal, or if we save the treasure and play the Stonescar Stranger alongside the Sirocco Glider. Ultimately, I chose the option to play the Stonescar Stranger and the Sirocco Glider this turn. It is the safest route, since drawing a random card could still be a blank this turn, while also having the benefit of setting up lethal the turn after.

Conclusion: As always, these guys hit the nail on the head for what the proper play is. One thing that I want to shine a particular spotlight on is a core concept to improving at Eternal. This is always asking yourself how aggressive you can be when attacking.

When determining if you should play aggressively or defensively, a basic principle to consider is: “If I play at maximum aggression and don’t defeat my opponent this turn, what can happen back to me that puts me on the back foot?” In this scenario, we are armed with the knowledge of an extra Thunderstrike Dragon as well as the ability to set up a lethal attack next turn through that Thunderstrike Dragon. We also know that our opponent is very unlikely to defeat us on their next turn, allowing us to proceed with maximum aggression. If you changed the board state a little bit, perhaps if we didn’t have the teething whelp or if our life total was so low that our opponent drawing a combat trick would leave us defeated, then there is more of an argument for a defensive posture. As it stands, we have our opponent on the ropes here, with a clear line to victory next turn. There is sometimes a strong compulsion to win as soon as possible. In this case, trying to win immediately could’ve been disastrous if we failed, since we would have less units, less pressure, and therefore give our opponent more time to stabilize than if we just played the slightly longer, safer way.

Well, what do you think? Please send your comments on over if you think there’s a better line, or even want to brainstorm the options previously established.

RoninX 2020-06-24 Eternal Version: 20.06.19
Interesting question. One thing that might potentially bear on the decision (in a hypothetical lower life scenario) is how many cards are left in your deck and whether your opponent has played like they have any tricks. After all if you have 4-5 hit on a stranger in 5-10 remaining cards, thats pretty different than if you have 23 (if the image shows this to non- mobile users you can ignore me).