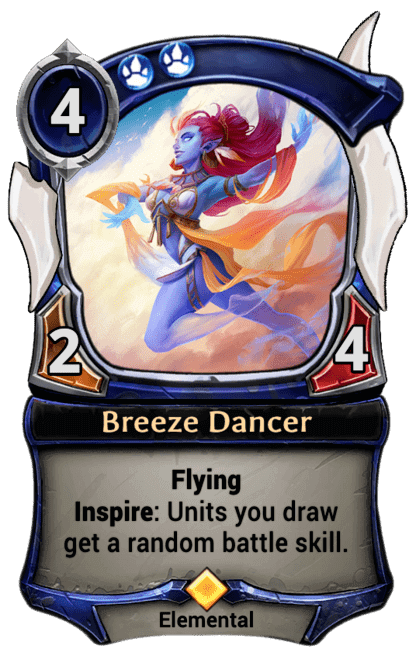 Flying
Inspire: Units you draw get a random battle skill.
Card sounds may differ from in-game as they get updated.
Flying - Flying units can only be blocked by other flying units, but can block ground units normally. They can also be directly attacked by Killer units and Relic Weapons.
Battle Skills - The Battle Skills are Aegis, Berserk, Charge, Deadly, Double Damage, Endurance, Exalted, Flying, Killer, Lifesteal, Overwhelm, Quickdraw, Reckless, Revenge, Unblockable, and Warcry.
Inspire - Units with Inspire grant a bonus to other units you draw.

IanHirst 2018-07-09 Eternal Version: 1.36
Anyone have any experience with this in Clockroaches?
Nightelfpala 2018-07-18 Edited 2018-07-18 Eternal Version: 1.36
I crafted 4 copies for a Crownroach deck (TPS with Swear Vengeance, Lumen Reclaimer, Piercing Grief, Feln control-like removal package). She plays fairly well, benefits from Crown of Possibilities herself which is huge, she's a flier in a deck that has otherwise issues with fliers, and her body is decent at blocking against aggro (although there is a risk of losing her to combat tricks).