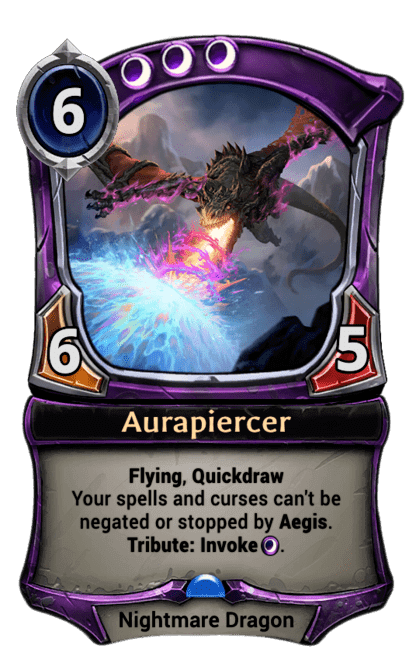 Flying, Quickdraw
Your spells and curses can't be negated or stopped by Aegis.
Tribute: Invoke .

Aegis - Aegis protects a unit or player from one enemy spell or effect. It doesn't block friendly effects, nor does it stop battle damage from Killer attacks, Relic Weapons, or normal attack and blocking.
Flying - Flying units can only be blocked by other flying units, but can block ground units normally. They can also be directly attacked by Killer units and Relic Weapons.
Quickdraw - Units with Quickdraw kill blockers before they can deal damage back. Note that Quickdraw only works while attacking, not while blocking.
Tribute - Cards with Tribute have an additional effect when played if a unit went to your void this turn. This includes units that die or units you discard from your hand and deck.
Invoke - When you Invoke a card you draw your choice of a spell, unit, or attachment of its factions.