Aegis, Charge, Endurance
Summon: Enemy units are Reckless and can't fly until your next turn.
Corrupted 2

Aegis - Aegis protects a unit or player from one enemy spell or effect. It doesn't block friendly effects, nor does it stop battle damage from Killer attacks, Relic Weapons, or normal attack and blocking.
Charge - Can attack the turn it is played.
Endurance - Units with Endurance ready at the start of each players turn, so they can attack and still be ready to block during the enemy turn. Additionally, they are completely immune to enemy stun and exhaust effects.
Reckless - Units with Reckless must attack.
Corrupted - When a unit with Corrupted dies, a 0 strength Nightmare Shade is played. Shades have the ability to sacrifice themselves by paying their corrupted cost to play the starting unit's Summon ability. Shades lose 1 health at the end of each of your turns. 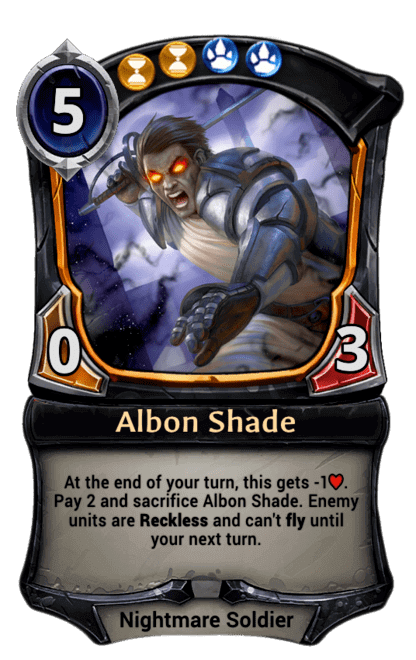