Hello and welcome to the greediest Charge Rod deck that can take you to Masters! I made it in about 4 days playing this deck and so can you.

Premise
The deck functions by exploiting Answer the Call and Divining Rod to quickly fill your board with powerful chargers such as Icaria and Kaleb. I have found myself often winning games on turn 6, and occasionally winning on turn 4 with Bulletshaper ramping up to Answer the Call, which pulls a powerful charger and attaches the Divining Rod. This can generate over 20 power worth of charging creatures, which is unparalleled by any deck before turn 8. Just check out the screenshots at the bottom to see how ridiculous your turn 4 can be.

Intro
I truly believe this is a Tier 1 deck right now, as I have had a positive matchup against every deck I play against. Before we get into the weeds on this one, I want to thank sifudanny (reddit.com/u/sifudanny) at TeamRankStar for the inspiration.

This deck started with TeamRankStar's "Call to the Divine" charge rod deck listed on their website here:
https://teamrankstar.com/2018/06/30/call-to-the-divine-divining-rod-after-the-fall-of-argenport/

I played that deck for a while, but I found it underwhelming. Answer the Call is a ridiculously powerful card when it hits right, but I was bogged down by Aurelian Merchant, which doesn't interact with divining rod. I found the combo to be inconsistent and the market didn't win me any games. So, I cut the Merchants and added an extra Divining Rod, two more Diogo Malaga, and another Privilege of Rank. I found that my combo was consistently going off with more chargers, and I found myself less frequently mana screwed.

Playing the Deck
Best case scenario, you have Bulletshaper on the board turn 4, and can discard a spell into Answer the Call. This will typically land you an Icaria the Liberator or Kaleb, Uncrowned Prince and attach Divining Rod, pulling one or two more chargers. If you hit two or more bombs this way, it's game over.
I have won the majority of games this way
Unlike most combo decks that rely on controlling the board to bring the combo pieces together, this combo only takes one card.
This is what puts it head and shoulders above other combo decks and makes it Tier 1. If you can't get that combo together on turn 4, Torch, Whirling Duo, and Harsh Rule will buy you time until you can play the big boys or draw Answer the Call. I originally thought Heart of the Vault didn't fit at all due to the TTT requirements, but the card is just bonkers and I rarely find myself missing the influence.

Common Matchups
Mono Time/Praxis/Elysian blah blah: These decks are insanely popular right now for one reason: Teacher of Humility. This card is broken as hell, but it's not game over if the Weights land. Typically you can Torch it early or block with your Whirling Duo. If you play your combo, you'll easily overpower their biggest units. If the game goes to turn 5, Harsh Rule will clear things up for you. For being (allegedly) the best deck out there right now, I had no problems.

Rakano and Elysian Ramp: These decks will play very similarly to yours, but you'll put a lot more beef on the board a lot quicker.

Feln and Unitless Control: These decks durdle for a long time and kill your first couple of units. When you play Answer the Call you'll win.

AP and JPT/S Midrange: One of the easiest matchups. Play bigger cards and win.

AP and SS aggro: If this deck had a negative win percentage against any deck, it was these types. Beserking elves can get a lot of damage in quickly, and can kill your early creatures before they can do their thing. This matchup definitely depends on the luck of the draw.

I'm really happy about this deck and its success. If you're wondering about card specifics and have questions leave a comment. I'll leave some screenshots below. Good luck out there! 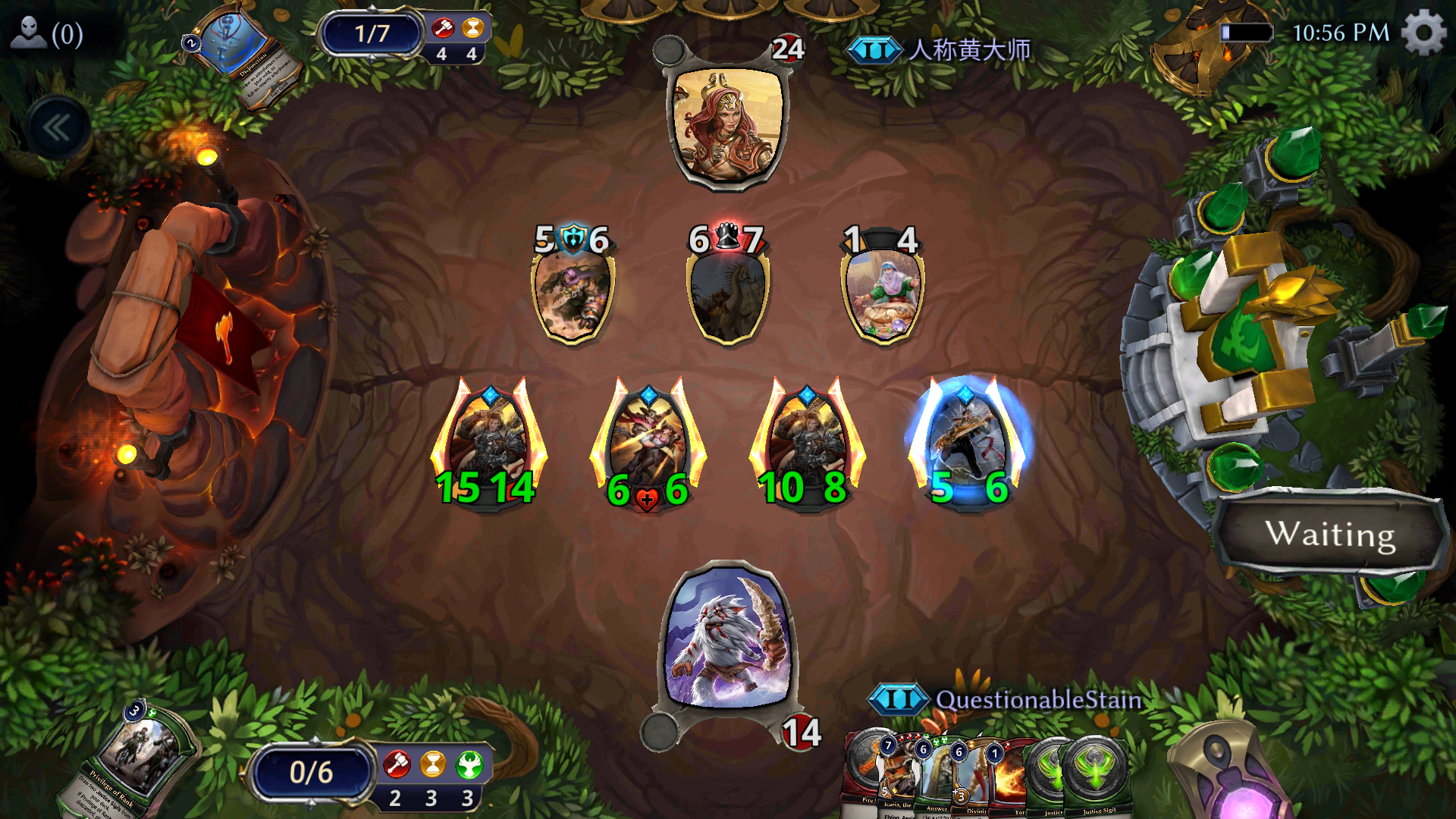 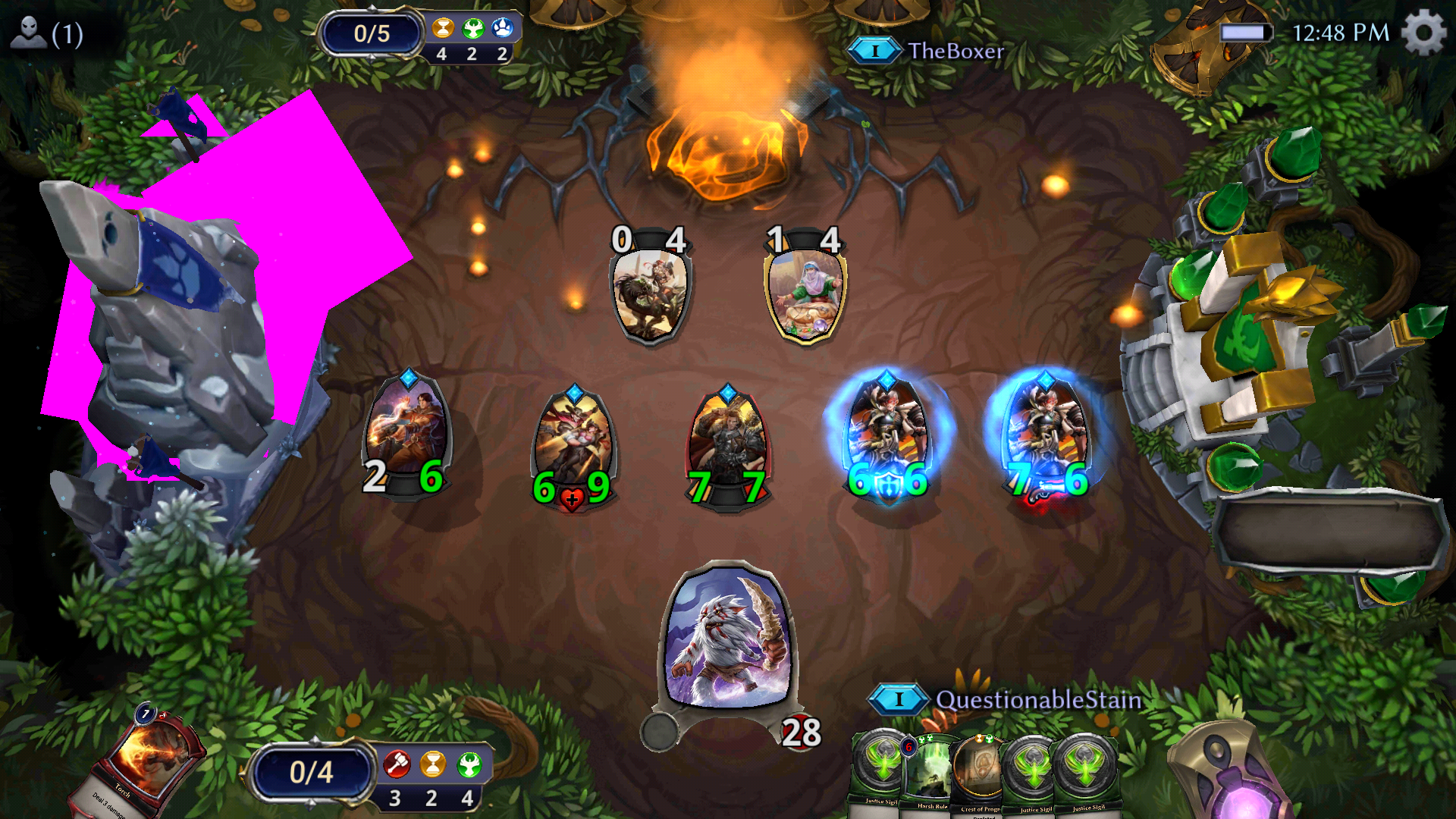 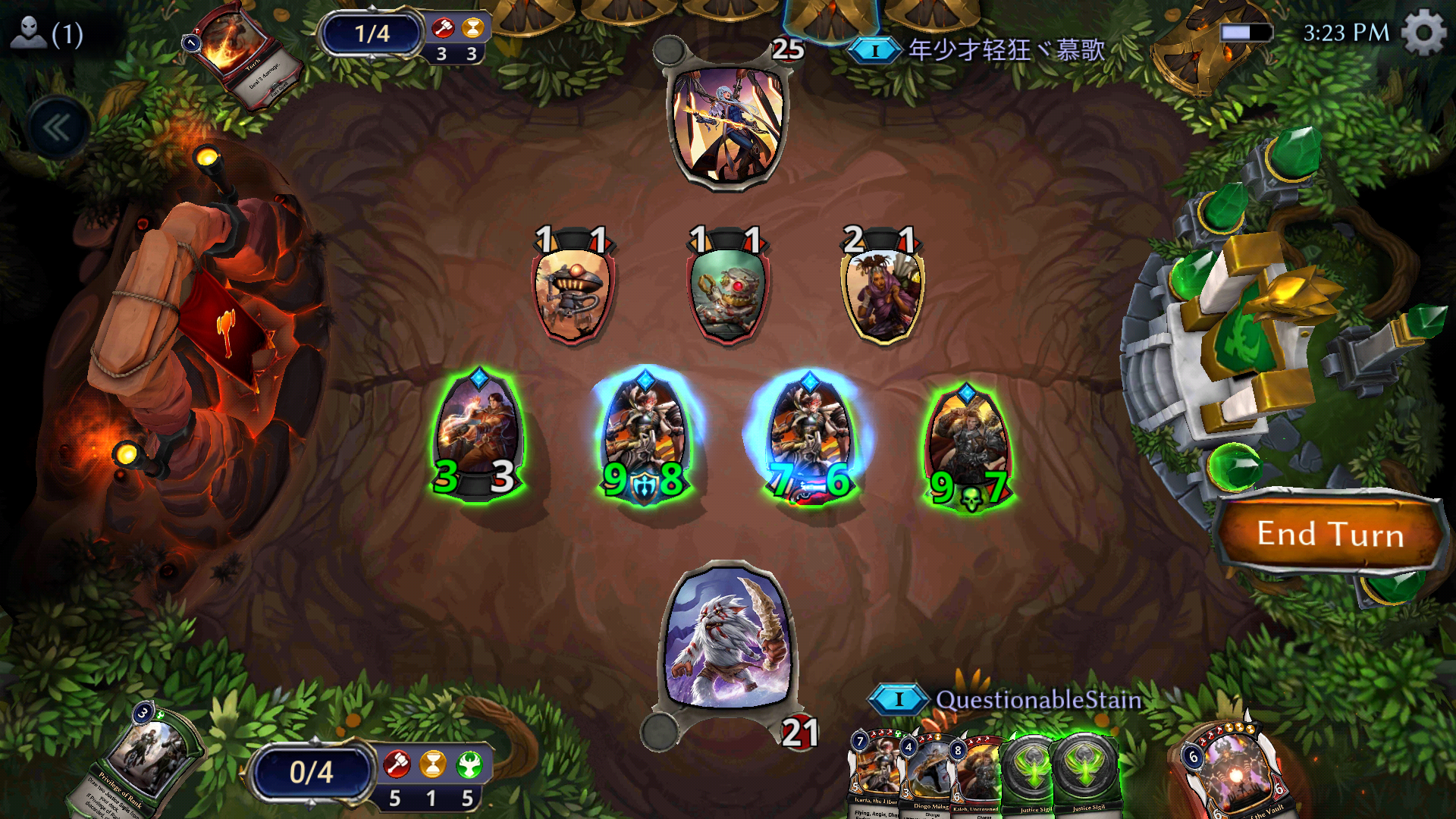 svrQQ 2018-07-18 Eternal Version: 1.36
Question, can you help with mulligans? I'm not sure what to keep other than hands that look vaguely playable/aren't all our bombs.
QuestionableStain 2018-07-18 Eternal Version: 1.36
Yeah, it's hard to cover all bases, but in general, Bulletshaper and Answer the Call are the top 2 cards to have in hand. The next signs of a good hand are Privilege and Torch. Lastly, Crests are very important. Hitting your curve isn't important before T5, so the deck is packed with crests. Filtering really goes a long way when all you have to do is survive until you can combo or Harsh Rule.
KingBear 2018-07-11 Eternal Version: 1.36
Tried this deck for a while, and had much more success when I swapped the Hearts of the Vault out for Soulfire Drakes. Heart of the Vault is a blank for Divining Rod, and it makes your influence much worse.
TheNose 2018-07-10 Eternal Version: 1.36
Your "typical" scenario of hitting a bomb from Answer the Call and attaching a Rod onto it is actually pretty unlikely. Your bombs being Kaleb and Icaria, since the rest of the units cost less than AtC. The probability of hitting either bombs is ~50%. The probability of hitting Divining Rod is ~29%, which gives you less than 15% chance of hitting both. This is not what I would call a likely scenario.
Super cool deck anyways, but not for the RnG sensitive.
Gaze73 2018-07-12 Eternal Version: 1.36
What are the odds of whiffing completely? I imagine that if I'd play this deck, Answer the Call would be a 6 mana do nothing card.
TheNose 2018-07-12 Eternal Version: 1.36
~6% so very unlikely. However, hitting an Alluring Ember or even a Bulletshaper at 6 cost feels like such a rob that you basically have to concede on the spot.
hsgroot 2018-07-09 Eternal Version: 1.36
I play this deck for a bit of fun, lose every game due to dying to aggro or not drawing power. I play against this deck and they Answer into Icaria/Rod/Icaria. My most hated deck now, lmao
LightsOutAce 2018-07-11 Eternal Version: 1.36
Basically my life
shamanix 2018-07-09 Eternal Version: 1.36
I often have the problem that an early enemy SST in conjunction with me not being able to ramp above 5 Mana (and obviously no Harsh Rule in my hand) let me fall too much behind to win the game. Is that just bad luck? I'm really missing some removal outside Harsh Rule.
Despite my negative win rate at the moment (9 games played) I enjoy the deck. Thanks for sharing
QuestionableStain 2018-07-09 Eternal Version: 1.36
Getting stuck at 5 mana with no Harsh Rule is a tough situation. If it's happening often that's bad luck, but yeah I've lost more than a couple games like that. Usually I block + torch SST while I wait out the lands. I've found that as soon as I hit 6, it's almost a guaranteed win unless they have 3+ Killers in their hand, so if you throw cards away to chump block, you'll (usually) get to 6 or a Harsh Rule.
FuriousOne 2018-07-09 Eternal Version: 1.36
I got smoked by this deck a day ago and couldn’t figure out what happened. Now I know. Good job on the deck. Bad news is I need like 40k to make it.
Fistofsteal 2018-07-08 Eternal Version: 1.36
Why no market for answer the call?
Prometheus 2018-07-08 Eternal Version: 1.36
He clearly explains why in the summary of the deck.
Fistofsteal 2018-07-08 Eternal Version: 1.36
His reply doesn't answer why no green merchant. 7 answer the call and it works to get Icaria. I've also added Bow master instead of Heart to increase the aggro matchup win rate and give more targets with answer and rod. 12-3 in top 250 masters with it.
QuestionableStain 2018-07-09 Eternal Version: 1.36
Yeah I hadn't actually considered Justice Merchant. There are pros and cons, pros being you'll hit AtC every game and have an extra land up your sleeve. Cons you'll make the deck less bomb-dense and you'll have more dead draws. For most decks merchants help you mitigate the effect of bad topdecks, but for this deck, you'll almost never run out of threats. Basically Justice Merchant will improve consistency early game, hurt it late. Worth testing though.
Fistofsteal 2018-07-09 Eternal Version: 1.36
I've found that it doesn't hurt late game but mostly due to the fact that i have more fliers, playing great bow over heart. I agree the combination of no heart and merchants makes you slightly less threat dense but I think it is well worth the consistency and life gain against aggro decks. I'll link my 65 in the next comment.
Fistofsteal 2018-07-09 Edited 2018-07-09 Eternal Version: 1.36
4 Alluring Ember (Set2 #172)
4 Seek Power (Set1 #408)
4 Torch (Set1 #8)
4 Bulletshaper (Set4 #244)
2 Privilege of Rank (Set1 #157)
4 Whirling Duo (Set3 #254)
4 Winchest Merchant (Set4 #126)
2 Diogo Málaga (Set2 #179)
3 Harsh Rule (Set1 #172)
3 Answer the Call (Set4 #137)
4 Divining Rod (Set1 #109)
3 Rizahn, Greatbow Master (Set4 #246)
4 Icaria, the Liberator (Set1 #329)
4 Kaleb, Uncrowned Prince (Set1 #61)
2 Fire Sigil (Set1 #1)
3 Time Sigil (Set1 #63)
5 Justice Sigil (Set1 #126)
4 Crest of Impulse (Set3 #251)
4 Seat of Impulse (Set0 #54)
3 Crest of Glory (Set4 #243)
1 Seat of Glory (Set0 #56)
3 Crest of Progress (Set4 #247)
1 Seat of Progress (Set0 #58)
--------------MARKET---------------
1 Shush (Set3 #259)
1 Stand Together (Set1 #334)
1 Harsh Rule (Set1 #172)
1 Answer the Call (Set4 #137)
1 Rakano Banner (Set1 #427)