I climbed to Top 70 in Masters during the February 2018 season (peaking at Rank 69) using versions of this list exclusively from Rank 1000+.

In a Charge-heavy meta, units with Ambush go up in stock. Over a third of the units in this deck may be played during your opponent's turn. These provide unexpected answers to enemy chargers and relic weapons, in addition to blocking standard attacks.

With Icaria and other evasive units being so prevalent, Scorpion Wasp is your friend.

Ayan, the Abductor is a Xenan staple, and here his +3 Ultimate pairs nicely with the Gunslinger/Pistol combo for late-game value.

An ambushing Cabal Countess delivers 6 or more points of unexpected Quickdraw attack. At 1 health she may not be much of a defender, but that Quickdraw damage adds up...especially when buffed by a Xenan Obelisk or Hideout Pistol.

Madness combos are typically considered a Feln and/or Stonescar thing, and rightly so because they receive a lot of support in those factions from multiple sacrifice effects. But Time also has a couple of underutilized tools that combine very well with stealing your opponent's units.

If Inquisitor Makto and his never-ending revenge are giving you a hard time, why not make him your own? With a Madness combo you can do just that. Madness plus Teleport allows you to permanently retain an enemy unit and play them with no influence costs. 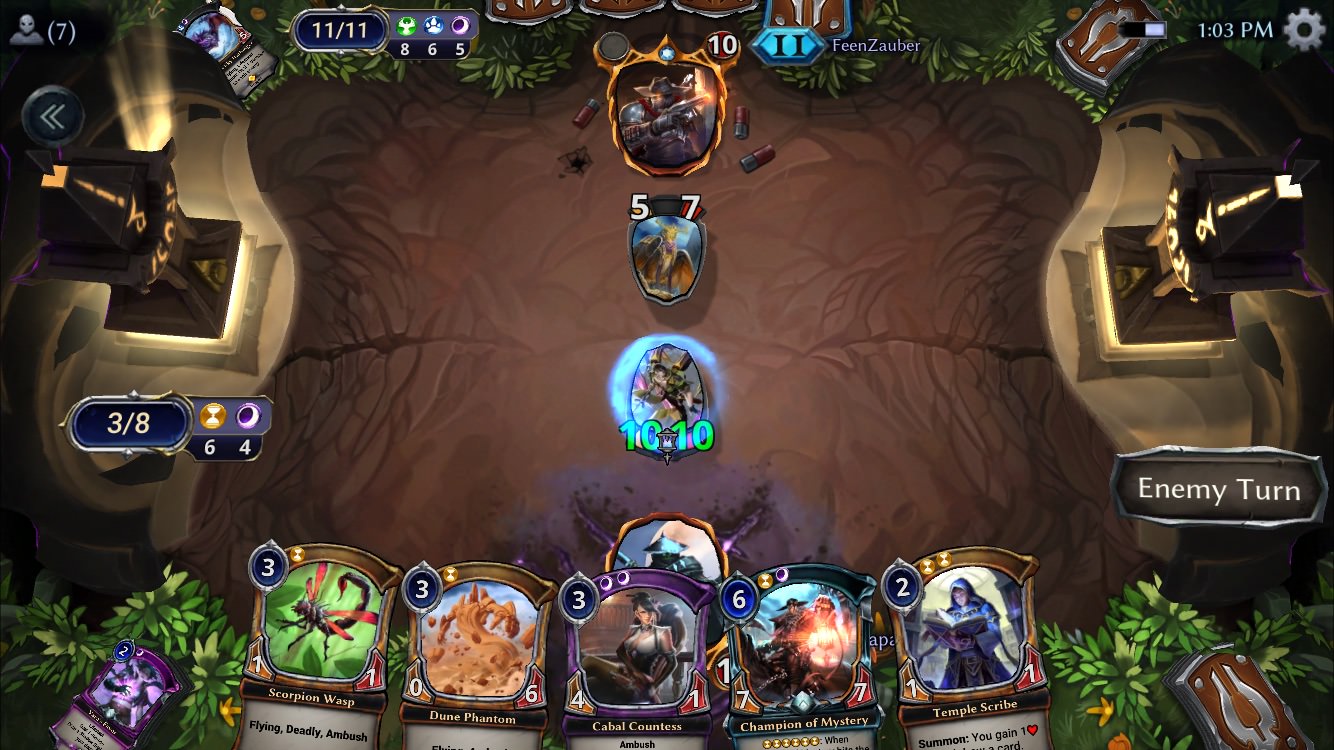 In Fire decks, Combust plus Madness lets you to take out two enemy units at once. But you can also do this in Xenan (provided the combat math works out) by combining Madness and Xenan Initiation. Just remember that Initiation will add +1/+1 and don't forget to account for enemy Quickdraw units.

The pairing of Madness with Ashara, Ruthless Assassin is perhaps not as surprising as it once was, but in a Time deck it is still unexpected and can be quite effective.

Lastly, Madness plus Devour is a classic combo, and 4x Devour are included here. In addition to removing Maddened enemy units, Devour is our main source of card draw when alternatively targeting friendly blockers and dead ducks.

No Annihilate or Banish, and only 2x Deathstrike here. However, multiple kills are made possible by the inclusion of Hideout Pistol and several Gunslingers.

Pistol can be quite scalable when combined with other cards. Early game you pair it with one of ChaMy's gunslinging Angels to take out weaker enemy units. Later on it becomes possible to remove enemies with 8 attack or greater by using Pistol in some combination with ChaMy himself, or any of the other Gunslingers buffed by Xenan Obelisk and/or Ayan, the Abductor's ultimate.

As far as facing aggro goes: You have 19 units that cost three or less for defending against early attackers. Nine of those units are Deadly, eight have Ambush, and five provide life gain. Extract and Vara's Favor are additional tools for both early removal and increased health. Hideout Pistol is another source of removal when combined with any of your Gunslingers. Additional life gain comes from 4x Devour and 4x Amber Waystone.

In a tournament setting you have even more anti-aggro tools in the sideboard: Suffocate, Devastating Setback, Devoted Theurge and Stray into Shadow
pukerman 2018-05-07 Eternal Version: 1.31.6
Thanx!