December Update: As Heart of the Vault has had its cost changed I've come back to this deck and made a few amendments to it. This deck is still very strong so if your looking for something to play then its still worth giving it a go! :) 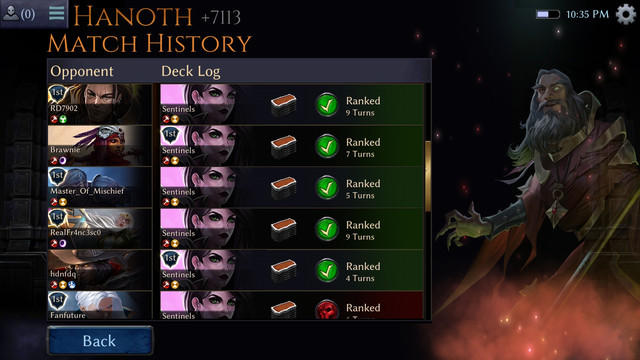 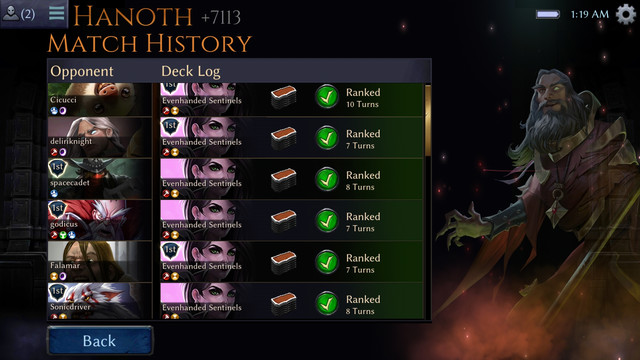 19th of August Update: So I've been playing this all weekend and I must admit I'm having great fun. Had a few crazy mirror matches and I must admit I love seeing my deck get played. As you can see from my screenshots I'm quite consistently winning around turn 7 or 8. Its seems people just arent really expecting Heretic's Cannon and if you get on on the board after you've already drawn out their kill spells then its so hard to come back from.

16th of August Update: Just got done with another cracking game. People never expect Sentinels to go wide but bonding a Tempered Sentinel off a Sandstorm Titan is just fun. Anyway I have been playing around with Porcelain Mask and I have found it really helps us land hits with our Waystone Titan, which helps to cheat out our game winners early. So yeah, Kudos to Yostage for the suggestion :)

Apparently no one expects to get beaten with a Sentinel deck. Especially in ranked. If you build this then be prepared for an influx of short conversations when people add you cos they feel entitled to vent their frustration at you. That said, lets begin.

This deck revolves around early game ramp, before we play some monster combo's and continues to draw cards for gas throughout.

As with many Sentinel decks our biggest weakness is failing to reach our power requirements on curve. We try to avoid this by using Power Stone, Trail Maker, Friendly Wisp and Evenhanded Golem. While this does mean that we cannot use odd cards I've actually found that it isnt an issue and as people see our colours and realise we have no torch they tend to do things they really shouldnt.

As we have so much ramp we are often able to drop a Sandstorm Titan or a Zuberi, Outlands Warlord on turn three. Should we draw out a kill spell then its fine, its only the first stop on the pain train but if they dont then we are able to get value very quickly.

Our late game win conditions are to play Great-Kiln Titan or to bond Novaquake Titan as either of these cards can decimate our opponents but I found that I won far more games in the midgame buy playing Heretic's Cannon either directly onto Zuberi, Outlands Warlord or to play it onto a creature he has given double damage. Blocking often isnt much use on turn 6 against a Sandstorm titan with 14 power, overwhelm and double damage.

As you can see from my screenshots I won 11/12 of my ranked test games and I will continue to post updates to this thread, as well as with more images of my Win/Loss ratio as I continue to play.

If you have any questions, concerns or feedback then please do not hesitate from leaving me a comment below.

Heart of the Vault x4

Comment Deleted
Akiki 2020-03-27 Edited 2020-03-27 Eternal Version: 1.51
Hey, i like this deck, but is it worth to craft it now or is it obsolete ? I need to spend 37k shiftstones, do you think it's still good now ?
I like the look of the big sentinel but wouldn't like to spend most of my shiftstone on something that loose most of the time (i'm still a noob at this game, that's why i ask) :D
Thanks for your answer,
Hanoth 2020-03-29 Edited 2020-03-29 Eternal Version: 1.51. 1
Hey Akiki, I haven't played this deck enough in ranked to get a feel for how it performs in the current meta but my assumption is that it wouldn't perform as well as it used too. When you have the currency spare or if your just intending to play casuals then give it a go but if you wanna get something to grind ranked with then it's probably not for you.

I'll endeavour to update this whenever the meta shifts though. I'd love to see the time of the sentinels return!! :D
Akiki 2020-03-30 Eternal Version: 1.51. 1
Hey, thank you for your answer, i'm not a big or hardcore player, i'm actually in gold and just doing like 2 3 games per day so not trying to be high master, just have fun (so not loosing most of my games). I crafted it, just done a few games with it so i can't speak much about it, i won some and lost some, but when it works it's funny having sooo big sentinels :p
Hanoth 2020-03-30 Eternal Version: 1.51. 1
Well I'm glad your having fun with it :) I look forward to running into you some time :D
stageerlee42 2019-12-13 Eternal Version: 1.47.9
Any chance there is a reasonable replacement for waystone titan? I only have the Jekk and Horrus campaigns.
Hanoth 2019-12-15 Eternal Version: 1.47.9
Hey Stageerlee, Waystone is a hard one to replace as he gives us so much power but you could try swapping him for Groundbreaker. Our deck works around making big units and hitting them hard so stopping them from gaining life can certainly help. Plus if you trigger its Spark then it synergies really well with Heretic's Cannon.
Paulo 2019-08-16 Edited 2019-08-17 Eternal Version: 1.46.9
Would not it be better to play another power card instead of stone? With this relic you have to pay 2 powers; with a power card you just play it. You don't have any card benefiting from having a relic and it can even be destroyed.

I really like playing with titans. I just don't have all these legendary ones. The best I can do is in late game play Pillar of Amar* supported by Xenan Obelisk.

*Just now I realize Pillar of Amar should have a mistypo on its name. I believe the right should bem Pillar of Amber.
sto650 2019-09-02 Eternal Version: 1.46.9
Somehow no one else said this, so I'll say it: you CANNOT do Pillar of Amar in this deck. Seven (7) is NOT an even number.
Hanoth 2019-09-10 Eternal Version: 1.46.10
Lol, even I hadn't noticed that xD good call. Honestly there are only two cards not in this deck that I think are legitimate picks. One is Saber-Tooth Prideleader and the other is Yushkov. Both of these give you a lot of bang for four and help with either controlling the pacing of the game or acting as anti relic/soft removal. For all those looking at this deck and considering changes I'd suggest you start there. Good luck picking what to cut though!! ;)
Paulo 2019-09-02 Eternal Version: 1.46.9
Pretty true. All this dicussion for nothing lol Thank you for warning us.
Hanoth 2019-08-16 Eternal Version: 1.46.9
The Power Stone cards are there for two reasons. The first so that if you have it in your starter hand you can get ahead early by getting to 3 power on turn 2. This can then let you start snowballing on turn 3 or 4 by casting mobs and then bonding units. The second is just that if you get stuck with one endgame then they pair up really well with Great-Kiln Titan as you can throw out extra damage.

I genuinely think its personal preference though and my experiences may be different from your own.
Ninjacan 2019-08-17 Edited 2019-08-17 Eternal Version: 1.46.9
Ya, I changed the powerbase. the coins are pretty useless, so that was an easy cut. I added seats and made room for a few more sigils, haven't had any power issues yet, and Devotee is basically more powerstone. If you're interested, I could post my list here. I'm playing the deck a lot, I really like it, I've made a few changes, trying different things out
Hanoth 2019-08-17 Edited 2019-08-17 Eternal Version: 1.46.9
Sure, I'm down to see your changes :) think we'll have to disagree on the value of the coins. I love getting a free blocker but I can also see why you'd swap them. Pulling a sigil and having to play it depleted isn't ideal. Either way though, thanks for playing my deck and I'm glad to hear your enjoying it :)
Ninjacan 2019-08-17 Eternal Version: 1.46.9
https://eternalwarcry.com/decks/d/yYCCJTfXhs0/another-evenhanded-sentinels
Hanoth 2019-08-18 Edited 2019-08-18 Eternal Version: 1.46.9
I've had a look though your deck and there are a few things I'm not a fan of. I won a huge percentage of my games either from Zuberi, Outlands Warlord or Heretic's Cannon and to remove them both will remove your mid game win conditions from the deck. The addition of Saber-Tooth Prideleader is a very good addition mind. I've been thinking for a while that we need relic removal and that fits well. I'll have a play around with it this weekend. Thanks for the idea :)
Strategist 2019-08-16 Eternal Version: 1.46.9
Great deck my friend.
Thank you for sharing this with the community.
I have a suggestion, have you thought of including the shepherd's horn...but that will contradict even-handed golem...give it a thought.
Thank you once again...👍
Hanoth 2019-08-16 Edited 2019-08-16 Eternal Version: 1.46.9
Thank you for the game. It really is a great feeling to play against someone using my deck :)

As is, this strength of this deck is in its card draw. As you've probably noticed the ideal plays on turn two are either a powerstone to speed up the ramp or a evenhanded golem to stop us getting stumped and I just couldnt add in an odd numbered card without a complete redesign.