My take on the Amplify combo in Expedition. Dear opponent, I hope you packed your Exploits XP 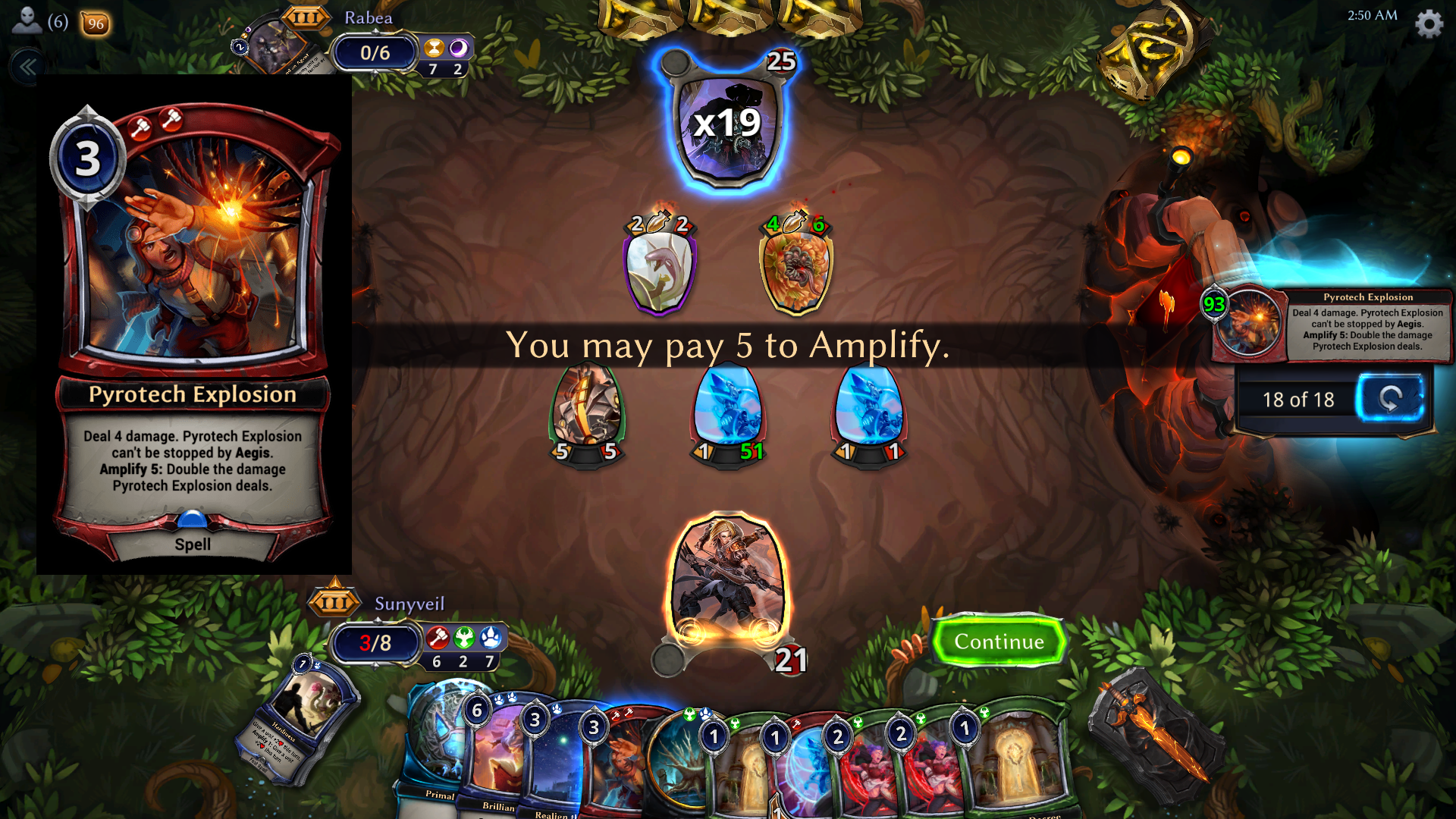 Hey everyone! Sunyveil here, and if you don't know who I am, I won the Spring Throne Championship last year and do a weekly competitive podcast with fellow Worlds competitor Stormblessed. Be sure to follow me on Twitch, Twitter, and join the Friends of Eternal Discord!

As is common for these types of decks, there are three different categories of cards for this deck: the enablers, the power generators, and the payoffs. Below, I've listed them within their sections from best to worst. Here's the breakdown:


4 Overloader: The key card in the deck. You're not winning without it, so make sure you only play it when you're either a) comboing or b) sure that they're not able to kill or silence it. Fortunately, it's usually not too tough to spare one extra power the turn you combo, but if you hit your opponent with Builder's Decree you can sometimes run it out there the turn earlier and get one more power for your first amplify.

3 Plea for Aid: Strictly Overloader 5-7 in this deck. Obviously it feels pretty bad to be paying 4 for a card that normally costs 1, but a) you need Overloader to win, b) you can tutor it up with Realign the Stars, and c) it's actually not as bad as it sounds. Theoretically you can get a Gleeful Firebrand with this, but I haven't needed to.


4 Reactor Forge: This gets you going. Hopefully you can play one on turn 2, and it will really speed you up. The life loss isn't such a huge deal with this deck most of the time because you kill them in one go.

4 Hardiness: Your best amplify card. Play it on your Overloader and amplify it for everything you've got the turn you plan on going off. Also my most common find with Realign the Stars. Generates 2(x-1) power, so 5 becomes 8, 6 becomes 10, 7 becomes 12, etc.

4 Martial Efficiency: Keep in mind that you can amplify multiple times on the same enemy units, but they do have to have a unit out for this to work. Also, don't be too shy about just throwing it on a Gleeful Firebrand to take something down in combat.

4 Celebration: You don't care about the unit, unless you're desperate (though worth noting you can hit Goldplate Golaith for sure on 10). Being a 2-cost amplify 1 card that doesn't have a limit on how much you can amplify it is plenty useful, though. Generates 2(x-2) power, so 5 becomes 6, 6 becomes 8, 7 becomes 10, etc.

4 Vicious Overgrowth: This can generate power if you have two Overloaders out, but most of the time it's just removal for the early game. The flexibility is nice.


4 Brilliant Idea: Draws lots of cards and replenishes some power to get started again (if you have Overloader in play). It's not uncommon to play this for 12, draw 8 cards, hit Hardiness, and use the 6 power you get afterward to jump-start another chain. Honestly, this is better than your actual wincon because it actually does something at 8, 10, 12, 14, and 16 power.

4 Pyrotech Explosion: The killing blow; does lots of damage. Don't be afraid to use it as removal early on, as the one you win with is often not in your starting hand.


4 Realign the Stars: Ties the whole deck together and gets what you need. Often times this is just Hardiness 5-8, getting Brilliant Idea or Pyrotech Explosion isn't uncommon either.

4 Gleeful Firebrand: This card does a little bit of a lot of different things you need. When you get going, almost every spell you play triggers the Firebrand. I lost a lot of games with amplify combo until I added this card. It blocks, plunders early on for power, plunders late for treasure troves, and acts as removal or a little bit of extra reach, whichever you need.

4 Builder's Decree: Technically an amplify card, though here it's basically just disruption. Playing this the turn before you go off all but guarantees that your opponent can't interact with you on your critical turn. Also, when amplified it creates a nice blocker/attacker that can put in a lot of work.


Whenever I build decks, I always have unanswered questions. The things I wonder most about this deck are:

-Is Builder's Decree worth the slot, and what should I replace it with?
-Is the powerbase appropriate? Right now it's at 28 no seeks. Theoretically this deck could also play Fire Etchings, but idk if you can get up to four fire easily for market access. Speaking of...
-Is no market the way to go? Feels weird, especially for a combo deck, but that might just be the way things are.
-How many Plea for Aid should I play? It's not great, but I feel like it might just be necessary.

Wow, that was way longer than I thought it was going to be. Hope you enjoyed, and best of luck!