When a spell is played directly on one of your units, it gets +2/+2.
Surge: Brynn gets Flying, Aegis, Berserk, Endurance, Killer, Lifesteal, or Overwhelm at random.
Card sounds may differ from in-game as they get updated.
Aegis - Aegis protects a unit or player from one enemy spell or effect. It doesn't block friendly effects, nor does it stop battle damage from Killer attacks, Relic Weapons, or normal attack and blocking.
Endurance - Units with Endurance ready at the start of each players turn, so they can attack and still be ready to block during the enemy turn. Additionally, they are completely immune to enemy stun and exhaust effects.
Flying - Flying units can only be blocked by other flying units, but can block ground units normally. They can also be directly attacked by Killer units and Relic Weapons.
Lifesteal - Units and spells with Lifesteal give you health when they deal damage, healing you equal to the damage dealt.
Overwhelm - A unit or spell with Overwhelm will deal any excess damage to your opponent on your turn (does not work while blocking).
Battle Skills - The Battle Skills are Aegis, Berserk, Charge, Deadly, Double Damage, Endurance, Exalted, Flying, Killer, Lifesteal, Overwhelm, Quickdraw, Reckless, Revenge, Unblockable, and Warcry.
Berserk - Units with Berserk can make a special double attack one time: If it survives the first round of battle, it will attack again. This can only be used once, and gives the unit Reckless.
Surge - When you gain influence, something happens. 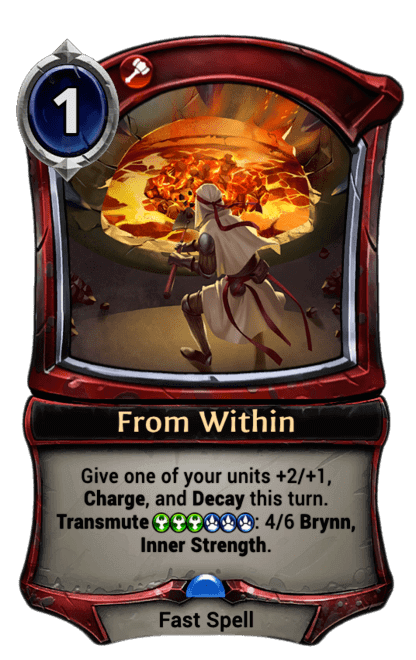