There have been a few Azindel decks crafted around the new Azindel, Mastermind card. Those decks, however, focused on the total Azindel meme package. I decided to, instead, ditch Azindel's variants and instead just include a copy package. The deck has the general Xenan makeup, but with primal for the copy effect. Though the deck was designed for fun and frequent "oh snap" moments, I've won several iterations of gauntlet straight with this deck with an average game round conclusion around 6-9 turns. I've yet to lose any games actually (though the luck fairy has skirted the double damage boss). Duplicating Azindel, Mastermind is obscene and runs away with the game. Copying any of the other big threats also steals the game, that includes enemy threats with End of Hostilities. Considering this has a typical Xenan backing, not too much explanation is needed. 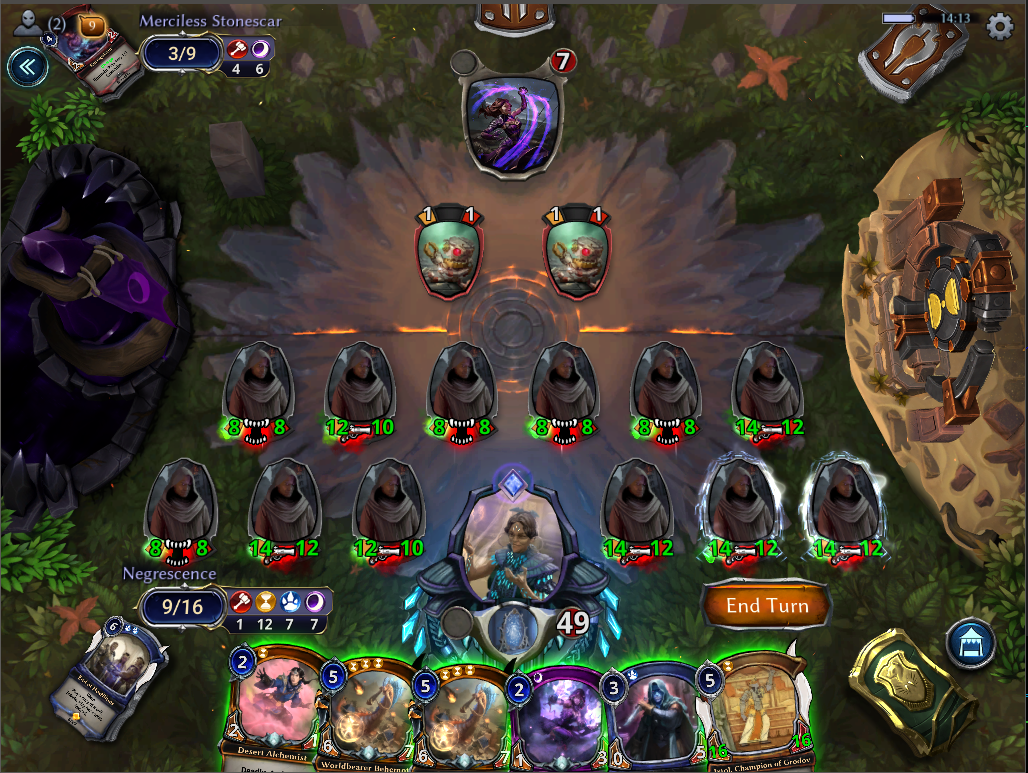 Reflector is a good blocker and combo card. He can be played early and copy into a big unit that can attack a turn early. He can be combo'd with Azindel for value or played and followed up with Mirror Image.

End of Hostilities is all about fun, but is rather efficient in this deck. It can be used to copy any of your or your opponents big threats. The tribute value can be obscene. Often, I've had games where 4 stealth Azindel, Mastermind are on the field at once. Rare instances, I'll smash a unit into a big enemy and duplicate them twofold. Vengeful Flight could be a substitute, but it isn't as fun, doesn't synergize with SST, can't be used on the same unit twice, and won't get you out of some sticky situations.

Added Word of Power. Getting 5 primal influence has been a cinch with either of the power fatties, though the value of the card is its deadly and overwhelm. This card has ended games much faster and produces endless deadly threats you can duplicate. Replaces either Xenan Temple or Grodov's Burden.

Quicksilver Mirror fits the theme and lends to the power of Display of Knowledge which I primarily just use for quickdraw and emergency removal. The card is more meme in this deck and hasn't actually seen much efficient use since matches are usually over by around turn 6-9. It's a point of fevered glee when you have this card in hand. You want to play it, but you know every other option at hand is better. Another relic, such as Linrei's Codex spellcraft, may be more effective for faster wins.

This was thrown together rather flippantly, so possible improvements are certain.

Devotee of the Sands x4 6

Awesome deck, been able to have 5 hidden Azindels on the board at once - playing 10 cards to start a turn is okay I guess.

Stranger/aggro decks are definitely the worst matchups, but market Coslo definitely helps against the latter.
negrescence 2021-07-27 Eternal Version: 21.07.21
Yea, I often feel I just have to play the mirror. A Mirror also is called "Vanity" for a reason...
Fortunately I haven't had to much trouble with aggro, save for the double damage boss. Requires a careful mulligan on that boss. I switched out Send an Agent for Equivocate for bosses like them and those pesky entomb effects...
The only problem I've had with strangers is Azindel likes to top deck a Prophetic Stranger or some other obscene answer to himself... I tend to go for the other fatties if I can help it. Though, the meme life just can't be let go.