Wanted to share my latest take on one of the oldest archtypes in Eternal - Charge Rod and explain why some cards are there and what you can/should cut, to suit you. TL;DR included at the end.
(Main core of the deck is Praxis, splashing "only" for Icaria, the Liberator and Naoki, Valiant Warrior).
First, you should decide about Market. If you want to go for Merchants, you probably want to go for both Auralian Merchant and East Annex Smuggler and cut Dragon Forge from the list. Market should contain Divining Rod as well as some recursion for it (Disjunction), card draw, removals or activators (later about them).
My take on Merchant version - Roddy
Going for Blazing Salvo, will give you mediocre removal with chance to throw out your stuck in hand big drops for situational cards. Deck pretty much gonna be unchanged.

Card explanation:
Dragon Forge - this is what makes this deck not a meme, giving you chance to have 8 virtual copies of Divining Rod, while also reducing its cost to 5.
Power Stone and Pillar of Progress - ramp is kinda important, also greatly lies on curve.
Creation Chant - giving more consistent mulligan while also shrinking your deck slightly for bigger Rod turns.
Units divided into 2 categories - activators (you want to play Rod on them, 8-16) and beatdowners (you want to summon them from Rod, 16-24). *Since my deck is more about rolling high (even more than Rod deck should), I am trying to have all my units be in red faction, to always get buffs from Kaleb.
Kaleb, Uncrowned Prince - makes your units even more deadlier, best beatdowner for this deck
Eclipse Dragon - flying beatdowner, while also combining greatly with Dragon Forge. Not a must, if you go for Merchants
Icaria, the Liberator - aegis unit, that will make your follow-up turn (if needed) more painful for opponent. Reason to splash Green
Naoki, Valiant Warrior - not so easy to remove without consequences. Reason to splash Green
Ghodan, Undefeated - I've been playing her in Praxis version and i am also kinda biased towards playing her and you should probably cut her her from the list. But I just like high-roll potential with her. Also warp mechanic is kinda underrated, even if you just see her on top of your deck. Pretty much unplayable from hand
Alluring Ember - main problem of this deck is to stick a unit for one turn to play Rod on it. This cutie helps with that, allowing you to play activated Rod for 6 mana (if drawn from Dragon Forge) while also kinda drawing a card if played from top
Diogo Málaga - 4 cost activator that will often force two damage spells from your opponent
Whirling Duo - 3 cost activator that will help you early game and in races

Honorable choices:
Milos, Rebel Bomber - nice 3 cost activator. I don't think you should play it with Duo, so feel free to choose between Lifesteal and Overwhelm. Kinda a must in Expedition or Praxis version
Cykalis, the Burning Sand - mediocre activator, but hits hard, if you don't mind not getting it buffed from Kaleb, feel free to play it
Galai, Shavka's Listener - good in Merchant version and in Expedition. Bad in every other case
Waystone Titan - good beatdowner, but Naoki took his place
Champion Grappler - overwhelm is good, therefore he is good in Expedition and budget replacement for Throne
Soulfire Drake - you can put 1-2 copies, to make all of your upcoming units flying
Shingane Captain - well..... if you are budget and you for some reason not disenchanted it.....
Torch - you should probably have some removals
Defiance - you should probably have some removals
Display of Creation - kinda stall, kinda draw, but pretty much only for Expedition
Harsh Rule (main deck) or Shen-Ra Speaks (market) - you might try them, but that should be you, who pressures

About power base. I've tried playing 12 Crests, can't recommend. Same with Diplomatic Seal. Emblems are not for this deck, therefore Seats are pretty much what we left with.

Mulligan and tips - you keep hand with Forge most of the time. Maybe keep hand with Rod and appropriate power (double Crest, sigil and ramp). Don't play Alluring Ember, unless you can warp him and have a spare mana, save him as backup for Rod. Don't play Dragon Forge too fast, you might topdeck Rod and get stuck without units in your hand. FFTJ is what you need most of the time. You can play Rod on stunned (Permafrost etc) units, feel free to do it if you see big card on top (Crests or Ghodan, Undefeated) or if you are desperate. 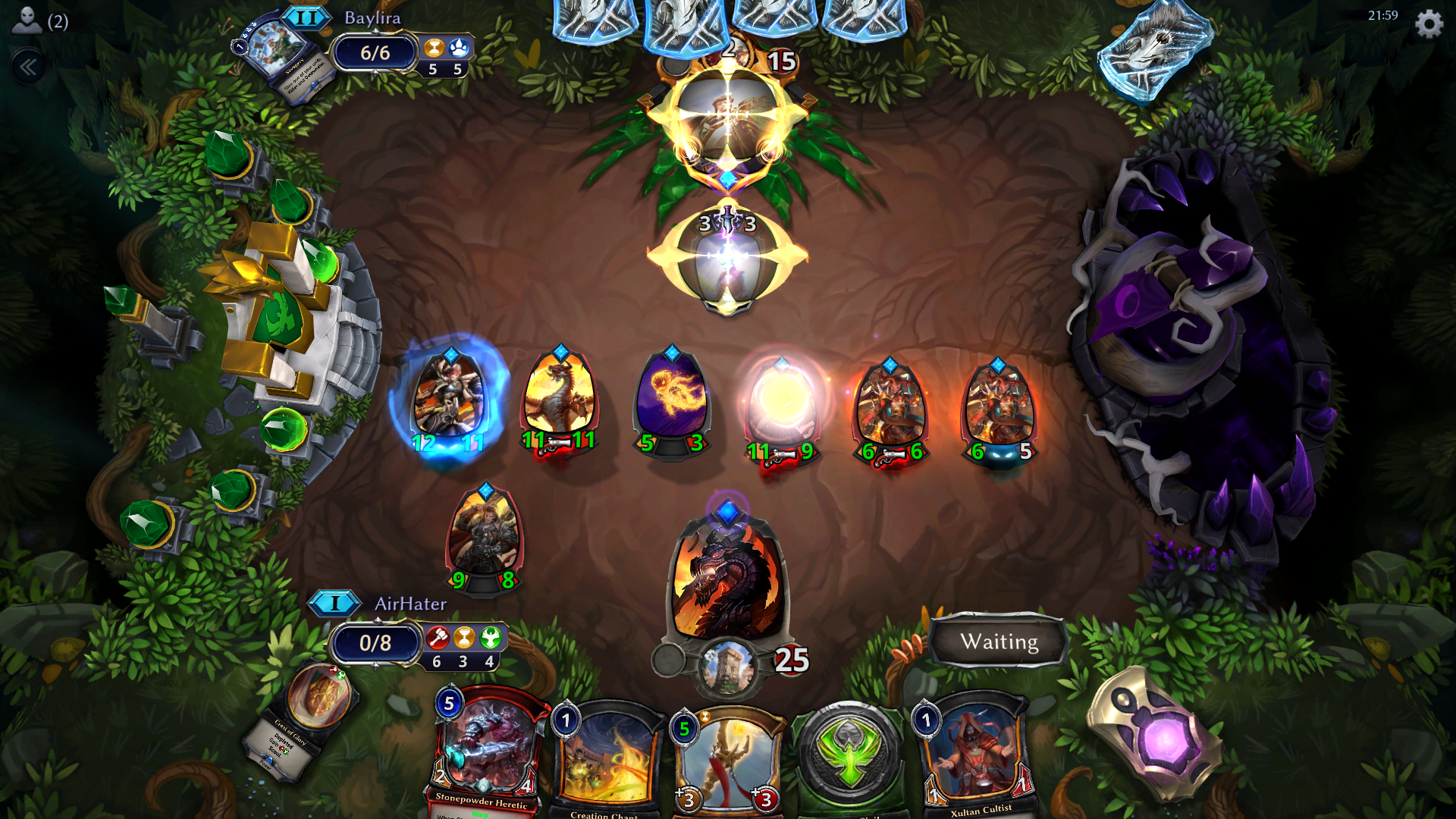 TL;DR This exact list is to relax and have fun when it works, with fast games that ends on turn 5-6. If you want something more consistent or you lack some of the cards, read the description